A brief introduction to the embroidery process:

The technical requirements for embroidery are: smooth, uniform, flat, uniform and clean. Shun means that the straight line is straight and the curve is round and straight; Qi is the next pointer, and there is no staggering on the edge; the flat refers to the accurate gesture, the embroidered face is flat, the silk is not skewed; the uniform is the pointer distance, no bottom, no overlap; It means that the embroidered surface is smooth and free of ink and other stains. 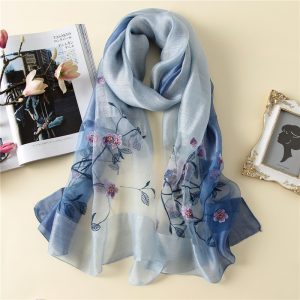 Su embroidery history:
Su embroidery has a history of more than 2,600 years. It has been quite large in the Song Dynasty. In Suzhou, there are workshops such as embroidered clothes, embroidered flowers, rolling embroidery workshops, and embroidery lines. In the Ming Dynasty, Su embroidery has gradually formed its own unique style with a wide influence. In the Qing Dynasty, the royal embroiders at that time were mostly from the hands of Su embroidery artists; folk embroidery was more colorful. At the end of the Qing Dynasty, Shen Shou pioneered the “simulation embroidery”. She was well-known at home and abroad. She once recruited artists in Suzhou, Beijing, Tianjin, Nantong and other places to cultivate a new generation. In the 1930s, Yang Shouyu, director of the Department of Painting and Embroidery at Danyang Zhengzheng Women’s Vocational School, created a random needle embroidery and enriched the Su embroidery needle method. Suzhou embroidery is known for its fine and elegant appearance. The pattern is beautiful, the color is quiet, the stitching is flexible, the embroidery is meticulous, and the image is vivid. The skill characteristics can be summarized as “flat, light, uniform, uniform, harmonious, smooth, dense” eight words. There are dozens of needles. Commonly used are needles, needles, trocars, mesh embroidery, and yarn embroidery. Embroidery is divided into two categories: one is practical supplies, there are quilts, pillowcases, embroidered garments, costumes, table blankets, cushions, etc.; the first category is appreciation, with screens, hanging shafts, screens, etc. It is widely used, including flowers, animals, figures, landscapes, and calligraphy. Double-sided embroidery “Goldfish” and “Kitten” are masterpieces of Su embroidery. Su embroidery has been used as a gift for the head of state for more than 80 times. It has been exhibited in nearly 100 countries and regions, and more than 100 people have gone abroad for embroidery performances. In 1982, he won the National Arts and Crafts Hundred Flowers Prize Cup Award, and the double-sided embroidery “Goldfish” was awarded the gold medal at the 56th “Poznan International Fair” in 1984. In the modern history of Su embroidery, there is an outstanding embroidery artist, Shen Shou. His works are shocked at home and abroad. Master Shen Shou: “The Evergreen Map” “Ladies’ Figure” “Three Horses” and so on. 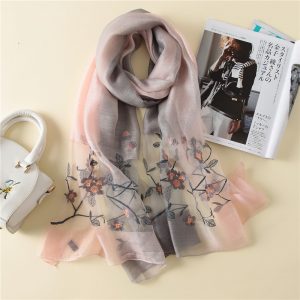 Su embroidery is famous for its fine stitches, light colors and fine embroidery. It has the characteristics of flat, light, uniform, uniform, fine, dense and so on. The theme is mainly small animals. Such as “Cat Screen”, “Wind and Flower”, “Fish and Shrimp” and so on. The double-sided embroidery that appears is different on both sides. Such as the cat’s eyes, the two sides of the color is not the same, very fascinating, its embroidery skills are superb, is the finest in embroidery.

What are the fabrics of custom silk scarves?
2022-05-08
Scarf by material & technology
Other Scarves Category
Recent Articles
Other list
Search
Go to Top